January’s meet of the Cheshire Brew Crew homebrew club saw the setting of our second ‘Recipe Roulette’ Competition! Again, each brewer picks a ‘Hop’ and an ‘addition’ from the random selections provided and then has a free reign to brew any beer they chose with those ingredients. Last year I got very lucky with Amarillo and Orange Peel and ended up brewing the Saison in Brewday 33 which went on to be crowned Grand Champion! No pressure for this year then!

This time around I picked Simcoe and Chilli! Not ideal but certainly not too obscure! The Simcoe hops really cry out of a hoppy American/Double IPA so hopefully a big grapefruit hit from loads of fresh Simcoe will be sufficient to balance out the heat from the chillies, and at least I have a little experience with brewing with chilli after the Smoked Chipotle Porter on Brewday 37. It will be a totally different challenge getting the flavours to balance in a lighter beer mind you!

The Recipe for Simcoe & Chilli Double IPA is: 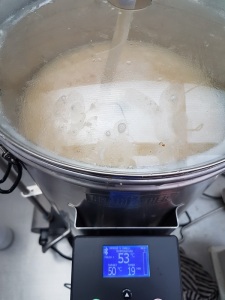 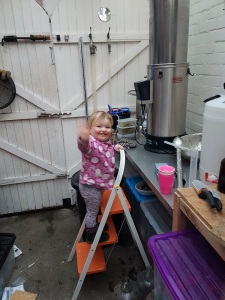 Unfortunately the brewday didn’t go exactly to plan… despite some minor adjustments to my Beersmith profile I managed to end up nearly 6 litres down on final volume 5 points down on target OG. I (as is the Grainfather chap I chatted to afterwards) am at a loss as to where the volume has disappeared to without adversely affecting OG as with so much missing you would expect the OG to be sky high to compensate! It was perhaps a combination of a number of separate smaller issues through the session that caused the cumulative losses. Back to the drawing board with this profile it seems!

Either way, I ended up with 16 litres in the fermenter with an OG of 1.074 instead of the target 21 litres at 1.079. Hopefully the yeast will help me out again and the final ABV should be somewhere around 7.5%. After 7 days in the fermentor I will be adding 20g of rehydrated Chipotle Chillies followed 3 days later by 200g of fresh Simcoe for a 3 dry hop. As the total volume is so low this batch will all be bottled and I will save the Corny Keg space for brewday 41!

The second outing for the new Grainfather was another single hopped brew to help use up the surplus of hops crammed into my freezer!  Inspiration for the recipe actually came from Brewdog’s DIY Dog download although they’ve not used Cascade in their ‘Ace of’ series. Again I used the same stepped mash profile as the Brewers Gold III recipe in Brewday 38 but otherwise copied the temperatures and hop timings direct from DIY Dog.

The recipe for the Ace of Cascade:

*cough* Even though I promised last time… I didn’t manage to take any brewday photos of this session! Sorry! *cough*

The stepped mash worked really well and wasn’t that complicated to program however due to me trying to setup a Grainfather equipment profile on Beersmith I somehow managed to over-sparge with nearly 2 litres of extra water. As a result the preboil and postboil OG’s for this brew were much lower than expected at 1.040 instead of the target OG of 1.054. Luckily for me the Liberty Bell yeast managed to go a couple of points lower than planned too so the FG finished up at 1.012 meaning the final ABV was 3.7%. Off target however not too dramatically in the end. Phew!

I think I have the settings down in Beersmith now so here’s hoping for an issue free Brewday 40!